How many kitchen fires happen each year?

No one wants to see their home damaged by fire or smoke, and while there are precautions that could be put in place to reduce the damage and number of casualties, such as smoke alarms, fire blankets, and fire extinguishers, accidents can still happen.

Below, you can find out more about where and how fires are most likely to start, as well as what you can do to prevent them.

How many kitchen fires occur each year?

Between April 2019 and April 2020, there were approximately 153,000 fires that had to be dealt with in the UK. This is the total number of both accidental and deliberate fires in buildings of any kind (dwelling, non-dwelling and vehicles). This number reduces to approximately 31,400 for accidental fires that occurred in only dwelling properties, such as homes. This can be broken down further to separate parts of the UK. Of the 31,400, approximately 25,500 fires were in England, 4,400 were in Scotland, and 1,500 in Wales.

While the thought of a fire is scary, this data can be used to try and prevent an outbreak in your own home. Read on to find out more about preventing fires in a kitchen. 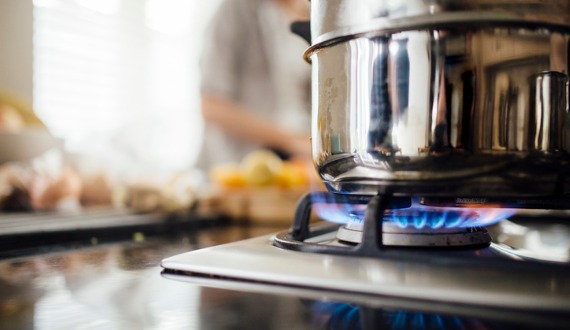 How many fires start in the kitchen?

Based on the information provided above, at least 15,702 fires started in the kitchen in 2019-2020. Nearly half of fires are caused by cooking equipment and a large portion by faulty equipment, as well as placing items near a source of heat. The latter could, therefore, include putting a tea towel on a lit hob accidentally, for example.

How do kitchen fires start?

All sorts of appliances are used in the kitchen to cook our food, from ovens to microwaves, slow cookers to deep-fat fryers. With all this heat and occasionally open flames, it’s unsurprising that the kitchen is the most commonplace for a house fire to start.

Cooking substances, such as oil and fat, can catch fire quite easily, particularly when used in a frying pan on a gas hob, for example. This is why it’s important to make sure that you never leave cooking unattended and that you clean your kitchen regularly, particularly areas where fat can splatter such as the hob, tiles, and inside the oven/grill.

Fires can start in microwaves, too, if you’re trying to cook something that has metallic elements in it, such as packaging or cutlery. Always check before using the appliance that you can cook your items in there and never put metal cutlery or tin foil in a microwave. Alongside microwaves, there are plenty of other electrical appliances that we use in the kitchen, including kettles, toasters, coffee machines, and more. If you overload plug sockets, these can become a fire risk too, so avoid using extension leads in the kitchen.

For more information on how kitchen fires start, the London Fire Brigade has an especially useful article that looks at fire prevention in the kitchen.

Can an electric hob catch fire?

An electric hob cannot catch fire of its own accord, however, if something is left on or near the burner or stovetop when it is switched on or still cooling down, such as kitchen roll, a pan, or a dishcloth, for example, then these things may ignite.

How to avoid fires in the kitchen

There may be some things you can do to prevent the likelihood of a fire breaking out in your home, and particularly in your kitchen. However, it’s still important that you have home insurance so that, should a fire ignite, your home and belongings will be covered.

The main rule when cooking in the kitchen is to never leave food unattended. To prevent fires from starting in this way, and to ensure you can put them out as quickly as possible you should always keep an eye on the food that’s cooking in or on any appliance, including the microwave, oven, or grill and the hob.

Clean appliances are less likely to cause a fire. This is because fat and grease is highly flammable, so you should be sure to clean the hob and surrounding area after you’ve used it. This is particularly the case for the grill pan. Many people often forget to clean the microwave, particularly when food splatters, so be sure to do this every so often too.

In the UK, it’s quite common to have your washing machine and tumble dryer located in the kitchen, but there are instances of machines catching fire. The biggest cause of tumble dryer fires is a build-up of fluff. You should regularly empty the filter in the dryer and remove the fluff to prevent a fire from starting. It may also be a good idea to check for fire warnings or product recalls and if you think your model is unsafe, invest in a new one. Having the machines serviced every year could be advantageous too.

The thought of a house fire can be scary, but by following just some of the advice provided above, you could reduce the risk of a fire and help to keep your family and home safe.

*All data has been taken from the government website. More information can be found here: https://www.gov.uk/government/statistical-data-sets/fire-statistics-data-tables

You may not have previously thought about where your property boundaries are or which fences belong to you, but knowing this information could be of assistance should you ever need to claim on your home insurance.

How to get home insurance after a fire

A house fire can be devastating. While usually, thanks to devices such as smoke and heat alarms, everyone gets out safely, possessions and valuables can be destroyed.

When you’re renting a property, accidents can happen that cause damage to the property. But who is liable for this damage? Find out here.